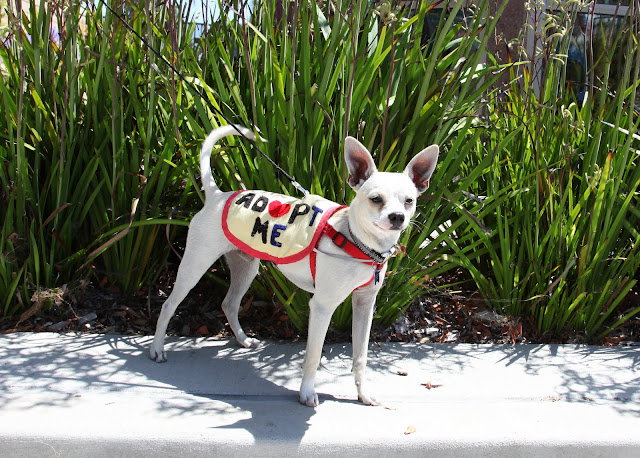 This is Boomer, an endearing little dog with a big heart.  I took his photo on Saturday at the Coronado Animal Care Facility open house, where he was waiting for the right person to adopt him and give him a good home.  Doesn't he melt your heart?  He did mine!
You can check out more adoptable local pets at www.pawsofcoronado.org.
Posted by Barb at 8:52 PM No comments:

Email ThisBlogThis!Share to TwitterShare to FacebookShare to Pinterest
Labels: Dogs, PAWS of Coronado

A Peek In Village Theater 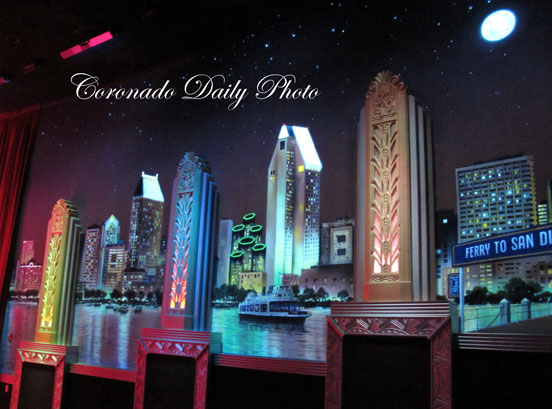 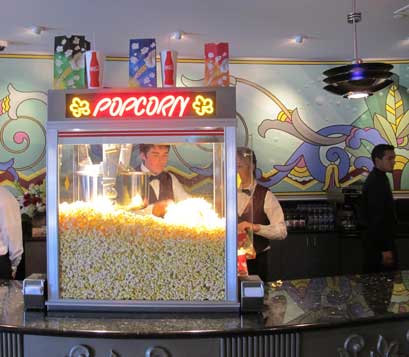 We went to the newly reopened Coronado Village Theater yesterday, and it definitely exceeded our expectations!  It is a luxurious little nod to the past with Art Deco styling and old fashioned wide aisles.
Inside the theater you are surrounded by wall murals that showcase Coronado scenes with a three dimensional effect under special lights.
We saw Cars 2, a cute, entertaining movie that kids enjoyed and parents thought was maybe a little too long, but worth seeing.
Hope you had a great weekend!
Posted by Barb at 11:12 PM No comments: 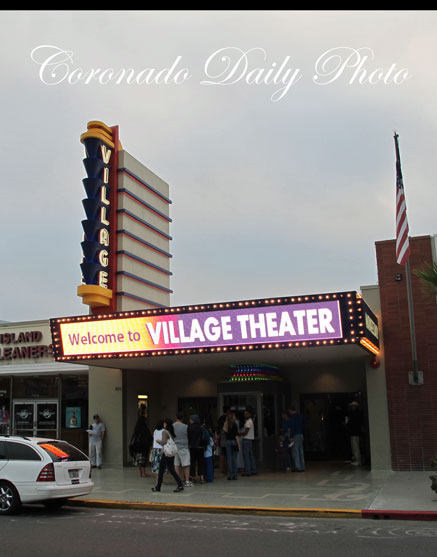 Coronado Village Theater is open for business!
I shot this last night as people waited in line for tickets to a midnight showing.  Since I went to bed way before midnight I asked around today and everyone I spoke to who has been inside the theater has been extremely impressed with the renovation.
I'll fill you in after I see a movie there this weekend!
Posted by Barb at 3:17 PM No comments:

A New Tool In The Toolbox? 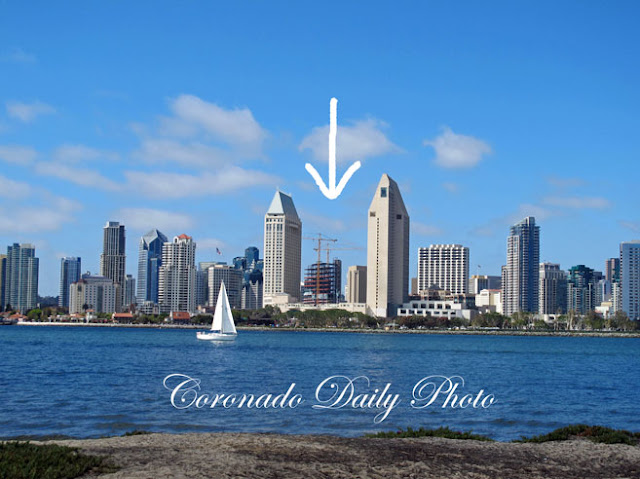 The San Diego Skyline has been called the "toolbox", because several its buildings look like tools.  Here you can see two screwdriver shaped high-rises, and a phillips head screwdriver shaped building.
Now there is a new building taking shape across the San Diego Bay, and I'm curious if it will have a tool shape, or be an ordinary building.
I'll keep you posted.
P.S.  The Coronado Village Theater reopens tonight, after being boarded up for eleven years.  The newspaper showed a sneak preview of the renovations, and it looks great, keeping many of its historic features.  I'll post some photos in the next few days!
Posted by Barb at 4:53 PM 1 comment: 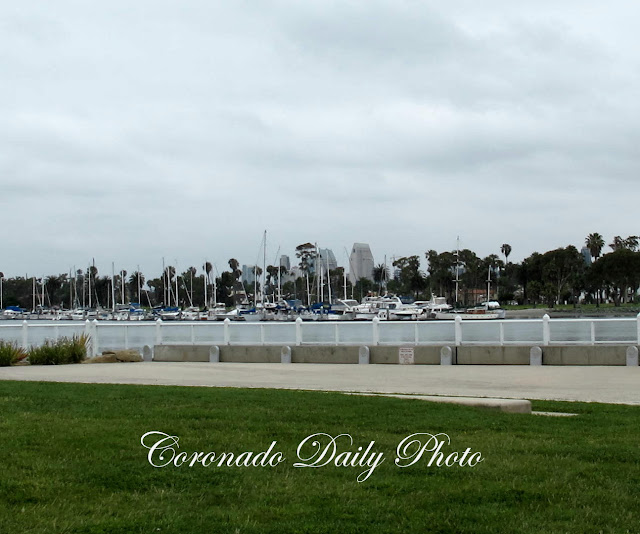 June gloom is upon us, but I think the thick marine layer just adds a quiet, reflective feel to our usually sunny town.
I shot this photo from outside the Coronado Recreation Center; you can make out the boats from the Coronado Yacht Club, with the Coronado Municipal Golf Course peeking out from behind, and of course the omnipresent San Diego skyline looming in the distance.
You may have noticed I've been spotty about posting this summer... it's funny how a little thing like school vacation can throw an entire household schedule into disarray (mostly in a fun way), but I'm ready to start posting photographs of our little island community again.
Hope you'll stop by tomorrow!
Posted by Barb at 12:14 PM No comments: 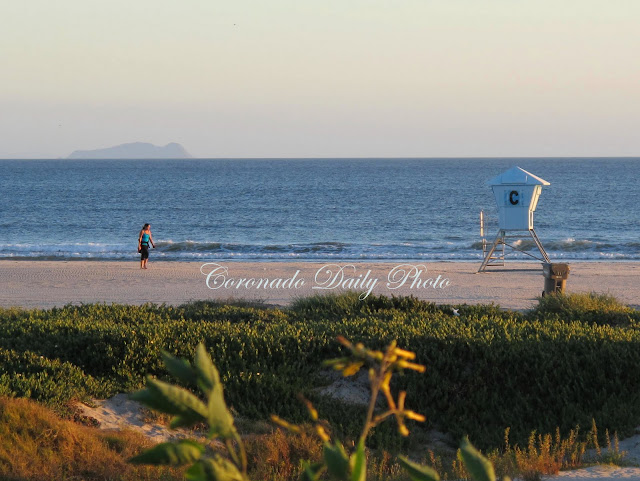 Life around here is slowing down in some ways {no school} and speeding up in others {beach days, a trip to Grandma's, camps}.  It's good.
Posted by Barb at 10:38 AM 1 comment:

View From The Top 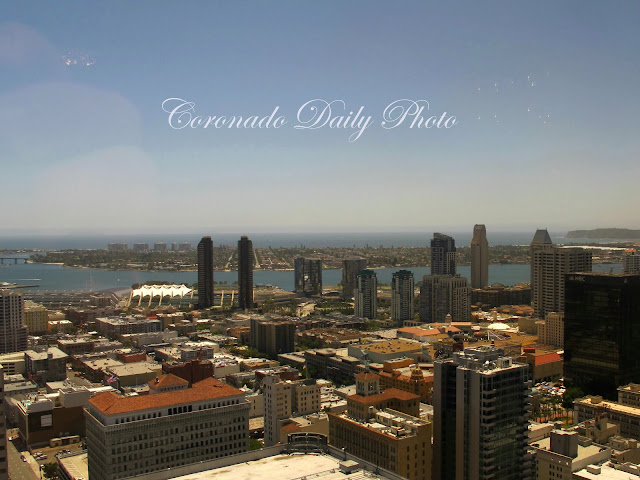 I shot this photo of Coronado last week from Symphony Tower in downtown San Diego.  It gives you a good idea of how close Coronado is to San Diego.  Point Loma is the finger of land you see in the distant right.  The San Diego Bay looks narrow enough to swim across, doesn't it?
The key to San Diego's charm is that so many of its neighborhoods have retained their original personalities.  Just spend time in North Park, Imperial Beach, Hillcrest, Pacific Beach or Little Italy and see for yourself.
Okay, back to Coronado; in this shot you can see a bit of the Coronado Bridge on the left, then The Shores condominiums - the only tall buildings permitted in Coronado.  If you look closely just to the right of that, you can spot the Hotel Del Coronado between the the matching San Diego high rise buildings.  Orange Avenue, Coronado's main street is between the two shorter silver colored buildings.
Before the bridge was built in 1969, the Coronado Ferry docked at the foot of Orange Avenue.  There is now a lovely green space in that location called Centennial Park, where the original Ferry Ticket Booth sits amidst roses.  Hint: Centennial Park is a wonderful spot for taking photos!
Posted by Barb at 11:47 AM 1 comment:

Caught In The Net 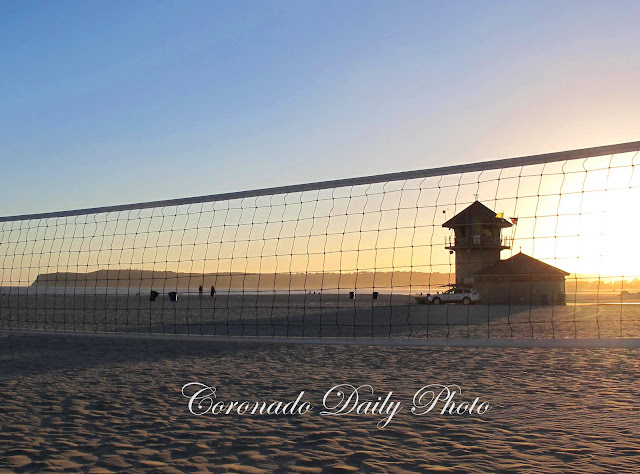 Tonight as I strolled around the beach, searching for something new to show you, I glanced up and saw the life guard station and Point Loma through this net.  Instant art!
Coronado has been beautiful and sunny, yet there were few people on the beach this evening.
School is out for the summer here in Coronado, and there is a relaxed, playful mood permeating the island.  Hope you're enjoying these long sunny days!
Posted by Barb at 10:15 PM 2 comments: 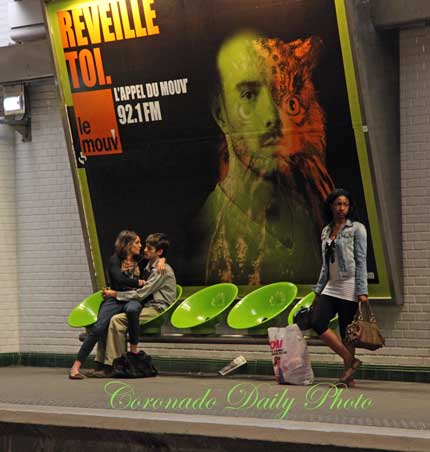 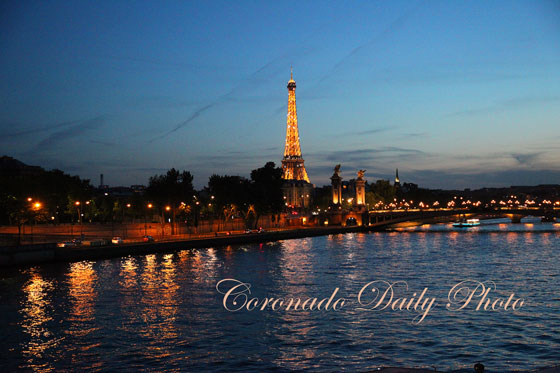 The Eiffel Tower lights up like a disco ball every hour on the hour, starting at 9 pm.  This still photo does not do it justice! 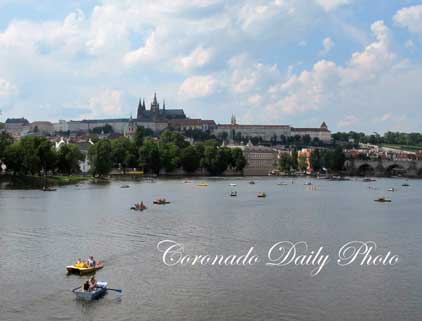 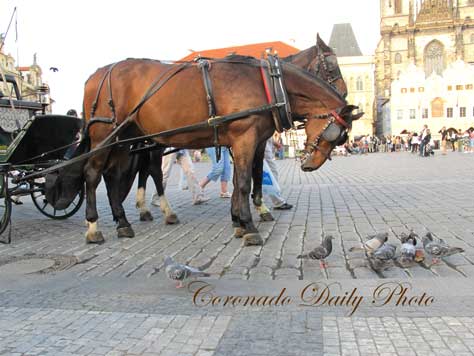 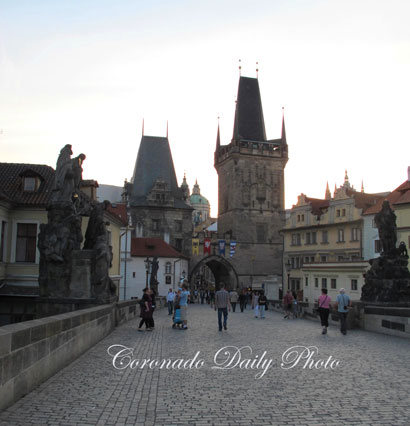 Here's the West end of the Charles Bridge in Prague.  It leads to Lesser Town, the section of the city I stayed in.  My hotel was just to the right of the tower.
Of course you didn't stop by Coronado Daily Photo to see shots of Europe, but I had to show you why this blog has been silent for the past few weeks.  Tomorrow I'm back to blogging about Coronado!
Posted by Barb at 10:19 PM No comments:

Email ThisBlogThis!Share to TwitterShare to FacebookShare to Pinterest
Labels: Paris, Prague
Newer Posts Older Posts Home
Subscribe to: Posts (Atom)
"Photographers deal in things which are continually vanishing and when they have vanished there is no contrivance on earth which can make them come back again." 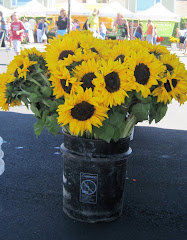